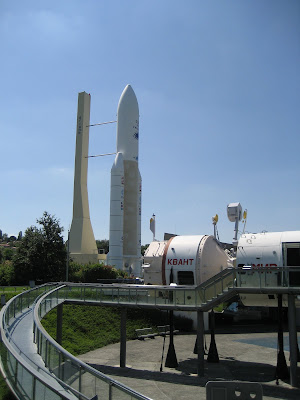 The other Toulouse attraction I visited last week was Cité de l’Espace, "Space City," an indoor/outdoor space museum (or perhaps theme park). Its trademark exhibit is a full-size mock-up of the Ariane 5 launch vehicle. It is 53 meters tall and I first spotted it from several miles out on approach to the Toulouse airport from the southeast when I was flying in from Frankfurt. It's shown above with another major outdoor exhibit, a full-size, walk-through mock-up of Russia's late, great Mir space station. I knew that Mir was big, but I was surprised at just how big it really was. It's set up with walkways around and through its several modules so you can really get an idea of what it was like inside. 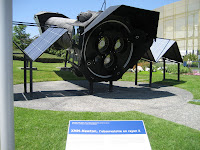 Other outdoor exhibits included a full-size Soyuz spacecraft, a full-size mock-up of the ESA XMM-Newton x-ray telescope (launched in 1999, still operational, shown at left), the large scale solar system model I blogged about the other day, a "galaxy maze," the "avenue of the infinite" (a powers-of-ten demonstration of the scale of things in the universe), and more (including some play areas specifically for smaller kids).

The main building houses a large number of interesting exhibits arranged by themes such as observing the earth, living in space, exploring the universe, weather, communications, etc. All the exhibits are well done and some of them are interactive in various ways. Another large building houses a planetarium and an IMAX theater where I was happy to be able to see the very recent "HUBBLE (3D)" (this and the planetarium were included in the admission, though I didn't have time for a planetarium show). I had paid an extra fee for a location-aware translation system with headphones which worked well for the exhibits. I was able to read the French descriptions just fine so I didn't really need it for those, but I figured it would allow me to hear the original narration for the Hubble film. Unfortunately this didn't work for me, but the French narration and dubbed voices for the astronauts were quite clear and easy to understand. 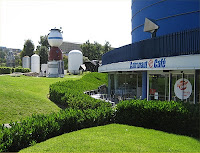 I didn't have much time, but I managed to see most of the exhibits and even grab a quick lunch at the Astronaut Cafe and a few small souvenirs at the well-stocked gift shop. Aside from the space exhibit area at the Air & Space Museum in Washington, DC, this is probably the best space-themed museum I have ever visited. If you're ever in the area, it's definitely worth a visit. I have a few additional pictures on my Flickr site and may post some more in the next few days.
Posted by FlyingSinger at 8:45 PM