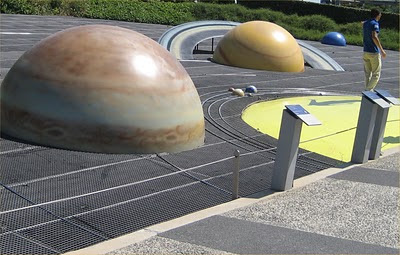 ...but I wish it was! What a great educational aid it would be to have a scale model solar system with Earth the size of maybe a basketball (roughly 56 million to one). The orbits are in order but of course not to scale for orbital distance - that would require a lot of land. This could be my next landscape architecture project (though my wife probably has other ideas).

Update: the sun doesn't appear to be in scale, but it's rather foreshortened in this view so you can't tell that it's really just a small chord of the sun's circular disk and it could easily be 9.7 Jupiter radii if you extended it.
Posted by FlyingSinger at 4:33 PM

Wow, great:)
Where have you found this model?

At the "Cite de l'Espace" museum in Toulouse, France. It's really great. I will write more next week.

Wow, this is really cool! It's very visual.