Megaplanes: Airbus A380 and Beluga 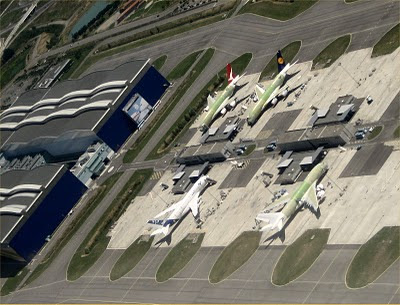 Last week I was in Toulouse for a conference, but I fortunately had some time in the schedule for a little aerospace sight seeing as well. Toulouse is the center of the French aerospace industry, home of CNES (the French NASA), EADS Astrium, EADS Airbus, and other aerospace companies. There is also an excellent space museum which I will write about separately.

As you might expect, Airbus production facilities are located next to the Toulouse airport. I realized when I landed that there might be tours available, and since I had a morning free the next day, I hoped I might be able to join one. I got lucky and there was a tour available the next morning. It was only in French that day, but my French is good enough that this wasn't a problem. The "Airbus Visit" tour is run by a separate company and it focuses on the giant A380.The visitor center includes a simulated "telemetry room" where you get a briefing about EADS Airbus and the A380 project, including a narrated replay of the A380's first flight in 2005. The monitors in the room show various videos (from cameras mounted on the test aircraft as well as chase aircraft and helicopters) and graphical displays of some of the 260,000 flight test parameters. This was pretty cool.

Then we boarded a bus to drive over to one of the final assembly buildings where three A380's were nearing completion. They reminded me more of green submarines than aircraft - incredibly huge airplanes. From the very high observation gallery, we could see the tiny members of assembly teams at work below us (no photos allowed on the tour, alas, but this 2009 article has some). From the outside gallery, we could see several other A380's in the nearby electronic testing area. No photos there either, but on my departure from TLS, I was able to take a couple of decent shots of those planes from the air. The picture above shows four A380's under test (one Qantas, one Lufthansa, two others unknown). You can see tour buses parked in front of the blue building in the background, which was the one with the observation gallery we visited. It looks like the adjacent buildings could accommodate up to eight aircraft for final assembly.The next part of the tour brought us back to the visitor's center to go inside a full-size mockup of the A380 fuselage. The two levels were configured with different seating and amenities for use in marketing to airlines. A very roomy airplane. I passed on the final part of the tour which was a visit to the very first Concorde SST because I was out of time (I went inside a Concorde in Seattle last August - nice, but really not such a roomy airplane). 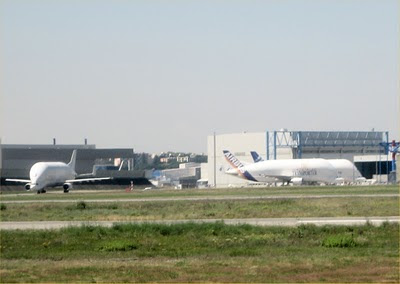 Back at TLS for the flight home, I could see many other Airbus aircraft at the facility across from the passenger terminal, including three of the five "Airbus Belugas," modified Airbus A300 aircraft that are used to transport large aircraft sections from various other Airbus sites in Europe to Toulouse for final assembly. The Belugas are also chartered for various other bulky freight transport chores as described in this Wikipedia article. On the flight from TLS to Munich, we passed over Switzerland and I took a few photos of the Alps. Window glare, clouds, and haze made it tough but a couple of pictures were OK. I've just spent 30 minutes with Google Earth trying to figure out what lake is in the picture below. I think it's near Mont Blanc (possibly Lac L'Emosson), but I'm really not sure. It sure is nice to have a window seat when flying over the Alps even when the pictures don't come out so great. I also need a new digital camera. 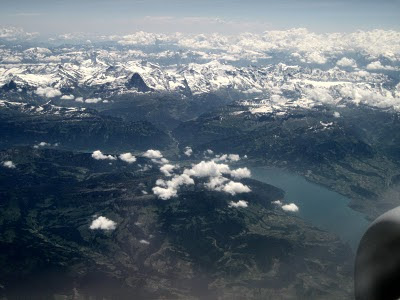 Posted by FlyingSinger at 1:19 PM

Thanks for your post! This is the Thunersee and Brienzersee(Lake of Thun and Brienz). The impressive Mountain is Eiger and there is Jungfrau and Mönch also. Cheers Beat

Nice picture - you couldn't have framed the Berner Oberland better if you had tried. The view is to the southeast looking at the Bernese Alps running along the upper third of the photo. Thundersee is the lake to the lower right – the village of Thun lies below the engine pod and the lake curves toward the left to the town of Interlaken – visible through the gap in the little white puffy clouds in the center of the photo. The Lutschine River flows through the gap in the hills toward Interlaken. Immediately upstream of the gap the river splits into two tributaries – the Schwarze Lutschine flows from Grindelwald on the left, and the Weisse Lutschine flows from Lauterbrunnen on the right.
The shadowed triangle in the mountains to the upper left of center is the Eiger north face. It remains in shadow until late in the afternoon – one factor that makes it so dangerous to climb. The pyramid to the right and slightly behind Eiger is the Monch, and the Jungfrau is the larger peak further to the right of center.
Behind the Bernese Alps – just below the cloud line - is the upper valley of the Rohne River, which divides the Bernese Alps from the Southern Alps. Zermatt and the Matterhorn are hidden by the big white puffy clouds in the upper right of the photo. Mont Blanc is obscured by clouds at the upper right-hand edge of the photo.