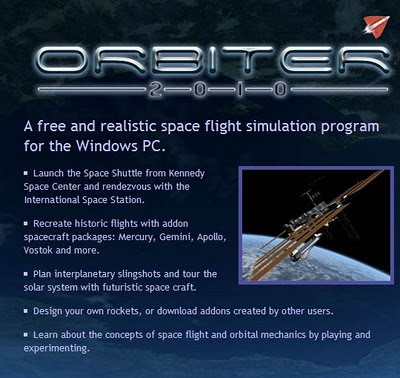 Great news for space flight fans - Orbiter 2010 has been released and is available for free download. This is the first new version of Orbiter since fall of 2006. There's also a nice update to the main Orbiter web site. Things are continuing to be crazy busy for me, so I've just managed to download the new version and haven't even installed it yet. But I plan to delve into it over the next couple of months. My first priority will be to test all the scenarios and tutorial steps in my Go Play In Space book to make sure they still work well with the new Orbiter version. I'm also considering doing an update to Go Play In Space specifically for the 2010 version (as I did when I created the second edition for the 2006 release of Orbiter).

This version of Orbiter has some cool new features, but the majority of Martin Schweiger's development efforts were devoted to internal and architectural changes which separated the "orbital mechanics engine" from the graphics and user interface components, to allow other developers to create "front ends" that take advantage of new developments in graphics software and hardware without requiring Martin to do all of that himself. This was major surgery for a program of Orbiter's complexity, but it will offer benefits in the long run. This press release (PDF) summarizes the other changes, which are substantial (including support for much higher quality planetary surface textures, more accurate atmospheric models, and a powerful built-in scripting language).

Note that Orbiter itself still does not include sound, so be sure to download and install Dansteph's Orbiter Sound 3.5 which works with Orbiter 2006 and 2010. Note also that while Orbiter includes a number of built-in spacecraft and many scenarios, there are hundreds of free add-ons that expand upon its standard features, most of them available from Orbit Hangar. Also be sure to check the Orbiter Forum to keep in touch with the world-wide Orbiter community.
Posted by FlyingSinger at 6:13 PM

Thanks for checking on "GPiS." It's a understated, tremendous benefit to the community.

Thanks Doug. I will get to that in early July I think. June is a crazy month for me.