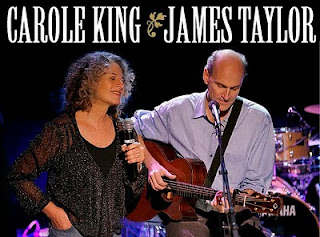 I don't go to many concerts these days, especially when it requires driving in and out of Boston. But last night's James Taylor and Carole King "Troubadour Reunion" concert at the TD Garden was worth the effort. My wife and I drove in early, parked under the Garden, and had dinner at a nearby Irish pub before the concert, so we were pretty relaxed by the time it started. JT and Carole were in excellent form, doing mostly their best-known songs from the early 70's. I've been to a few JT concerts over the years (he's one of my idols and almost certainly the reason I tried to be a singer-songwriter myself), but this was the first time I've heard Carole King live. "Tapestry" is one of my favorite albums, and I have to admit it gave me chills to hear her perform "It's Too Late," "So Far Away," "Natural Woman," and "Will You Love Me Tomorrow?"  The band was great too, including three core members they both performed and recorded with way back in 1970. Great stuff.
Posted by FlyingSinger at 3:06 PM