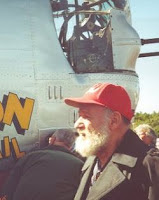 My father-in-law, Charlie Cook, passed away yesterday. He was 87. After serving four years as a military pilot in World War II, he went back to school for a master's degree from Clark University and then worked for many years as a psychologist, working for the state of New Hampshire and later in private practice. I interviewed Charlie in 2000 and wrote an article on his flying career, which you can find at MiGMan's Flight Simulation Museum. I also wrote about Charlie and my own father in a Veteran's Day post in November 2005.

The war left emotional scars that Charlie struggled with all his life, but like so many others of his generation, he didn't think he had done anything out of the ordinary and he didn't ask for any special attention or credit. Charlie had a quick mind and always enjoyed learning - I found a college lecture on Einstein and relativity in his DVD player yesterday when we stopped by his house to check on things. He was a good man and we will miss him.
Posted by FlyingSinger at 9:31 PM