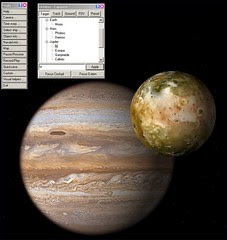 Continuing with the quick stuff you can do with Orbiter, here's how to take a quick tour of the Solar System. Although Orbiter scenarios generally include spacecraft and involve operating them (you can even switch between multiple spacecraft), you also have direct access to Orbiter's camera without bothering to fly anything. Regardless of what any spacecraft may be doing, you can use the Camera dialog box to move the camera to any planet or moon or to any surface base, spacecraft, or space station that is defined in the current scenario. Once there, you can control the field of view and zoom level of the camera, and move it around with the mouse.

Orbiter also gives you control over time - the Time Warp dialog can speed up or slow down time at will, from 0.1x (10% of real time, slow motion) to 100,000x. You can also selectively turn on various text labels so you can tell what planets, moons, stars, and surface features you are looking at. This is controlled by the Visual Helpers dialog. Here's a quick tour of the Solar System:

1. Start Orbiter and Launch a Scenario - See the January 10 post if you need advice on installing and starting Orbiter (remember to go to the Video tab to set your screen resolution before running a scenario). Although you can tour the Solar System in any scenario, the best one to use is Grand Tour which is found in the folder labeled The Solar System. This scenario has good pre-defined viewpoints for most of the planets and moons of the Solar System.

2. Open the Main Menu - Once you see the 3D view of Earth, press [F4] to display the main menu, then click Camera... to display the Camera dialog. You should also open up the Time Warp dialog so you can easily speed up time to see the rotations of the planets and moons. The Visual Helpers dialog lets you turn various labels on and off (helpful with Jupiter's moons when you are zoomed out and speeded up to see them zipping around the Jovial Giant). You can open these dialogs as needed or leave them open on the screen as Orbiter runs.

3. Tour the Planets - Play with Target and other buttons in the Camera dialog to see what they do, then click the Preset button. Double click any item in the list of presets to go to it. Try clicking the 1000x button on the Time Acceleration (Warp) panel to make the motions more apparent (you can also use the T key to speed up and R to slow down). Use the Visual Helpers dialog to turn on Planetarium mode and select various labels and grids.

That's it! You can zip around the whole Solar System in about 10 minutes, but be sure to take time to smell the roses (on Earth anyway). Use the mouse (right button) and mouse wheel to change the view and zoom. For more details and ideas for touring, see the second half of chapter 2 in Go Play In Space.
Posted by FlyingSinger at 9:15 PM