Orbiter for Educators: (Almost) No Prep 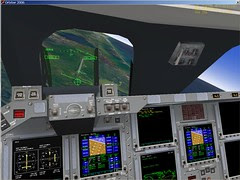 Orbiter is a freeware space flight simulator for the PC that I have written about extensively in this blog and elsewhere. Aside from being a fun way to "Go Play In Space" (the title of a free tutorial ebook I wrote about Orbiter) for people with an interest in space flight, Orbiter also can also be a useful tool for teaching about the solar system, space flight, atmospheric flight, physics, and other subjects. If you're a teacher, you might say, "Great, but when would I have time to learn this thing?" I don't know the answer to that, but the good news is that there are some cool things you can do with very little preparation beyond downloading and installing the software (~20 minutes on a good connection) and following a few instructions. These include giving a cool 3D tour of the Solar System and showing pre-recorded "flight recording" playbacks of the simulated launch and landing of the space shuttle (not just a video - you can control the "camera" and view it from inside or outside the cockpit).

This is not quite "no prep," but it's pretty easy. In later installments I will describe things you can do if you can take a little time to learn more about Orbiter. Here are the basics to get you started, which are described in more detail in Go Play In Space (this is a free 9 MB PDF download).

1. Download and install Orbiter - Go to and print the Download page of www.orbitersim.com, where you will find download and installation instructions and a list of "mirror sites" where you can get the actual files. Download the full Base package (63 MB) for Orbiter, and if possible, also download the high-resolution (L10) Earth textures (79 MB) and hi-res "Planets & Moons" (72 MB). These are not strictly necessary but they make the planets look even better (see chapter 1 of Go Play for more details).

2. Download and install Orbiter Sound - This is a separate but nearly essential "add-on" package that is easy to install and adds all sorts of sounds and even music to the otherwise silent Orbiter (sound is easily configurable). Go to Dansteph's download page, download, and run the file Orbiter Sound 3.0 (10.4 MB) to install it (see chapter 1 of Go Play for more details).

3. Start Orbiter and Choose a Playback Scenario - Double clicking the Orbiter icon displays the Launch Pad, where you can pick and run a scenario from one of many folders (go to the Video tab first to set your screen resolution). Double click the Tutorials folder and then the Atlantis Final Approach playback scenario (a very quick playback with on-screen text explanations). Once the playback starts, it will switch to different views automatically. When it first goes to an internal view, press [F8] to switch to the 3D "virtual cockpit" which looks more like the real shuttle cockpit. You can manually toggle between internal and external views with [F1].

4. Learn the Basic Operations - The main view things are that holding the right button and moving the mouse lets you move the camera around, while the mouse wheel (or PgUp/PgDn) controls camera zoom. The [F4] key displays the main menu. Choose Exit from the menu to quit (or use Control-Q).

5. Watch Atlantis Land - Orbiter is interactive - you can do everything yourself and even take over a playback at any time to fly it yourself - but playbacks are nice for talks because you only have to worry about the views. Another quick tutorial playback is Smack! Rescue (described in chapter 2 of Go Play), and Atlantis Launch, found in the Playback folder.

I'll do a "some prep" article soon to talk about touring the Solar System and taking control of an orbiting spacecraft. Later articles will talk about using add-ons to simulate historic space missions , making forces visible, and other subjects.
Posted by FlyingSinger at 8:42 PM