In space, no one can hear you flush 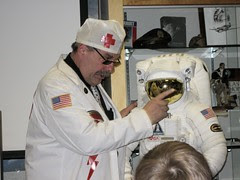 I visited the New England Air Museum in Windsor Locks, Connecticut on Saturday with fellow members of the Aldrich Astronomical Society. After a guided tour of the aircraft areas (including an original and still operable engine built by the Wright Brothers in 1910, and a beautifully restored B-29), we had a special presentation by "Dr. Flush," the "stage name" of Mr. Donald Rethke. Starting in 1963, Don spent more than 40 years at nearby Hamilton Standard (now Hamilton Sundstrand), working on space life support systems, including the environmental systems for the Lunar Module and the Apollo space suits. More recently he was involved in developing the special toilets used in the shuttle and the ISS, resulting in the colorful nickname he uses in his educational presentations.

In spite of a power failure that required him to do his presentation under emergency lights and flashlights, Don gave a fascinating overview of the challenges of "life after liftoff" and also displayed and discussed some real hardware, including the "guts" of the Apollo LM life support system and space suit "backpack." These were systems that simply had to work, and of course they did very well. He also brought a reduced scale mockup of the EVA spacesuit currently used by shuttle and ISS astronauts (see picture above).

The design of a toilet for use in zero-G was also a challenge. It could not use any water (making the moniker "Dr. Flush" somewhat of a misnomer in this application), and it had to be reliable, easy to clean, odor free, and much more. For a (fully clothed!) video demonstration, check out this NASA page.
Posted by FlyingSinger at 4:37 PM