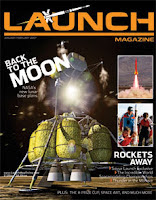 In November 2005, I wrote about ESPACE Magazine, a high-quality French magazine focused primarily on space exploration. Although there are some good astronomy magazines in the US, I mentioned wishing that there was something more like the French ESPACE published here. It looks like there finally is, though it's something of a hybrid that covers both model rocketry and spaceflight (which is really not a bad idea).

LAUNCH Magazine was launched in September 2006 with its first bimonthly issue, though I only discovered the magazine today at Borders Bookstore, where I bought the third issue (January/February 2007, pictured). It's nicely produced and has articles on NASA's Moon base plans, space art, the X-Prize Cup, and the Soyuz spacecraft, as well as various articles on model rocketry. This looks like it will be a pretty interesting magazine for space enthusiasts (I can't afford the time to become a model rocket enthusiast, though I wish I could!).
Posted by FlyingSinger at 12:04 AM

Thanks for pointing out that magazine Bruce, it looks quite nice, I'm going to subscribe I think.