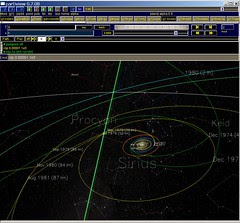 I stumbled upon another piece of astronomy-related freeware, the Digital Universe Atlas from the Hayden Planetarium in New York. It consists of a number of astronomy databases, starting with the Milky Way, and it includes a program called Partiview to display and let you graphically "fly" through the data. Partiview was apparently designed as a general purpose data display and exploration tool, and its GUI is suitably powerful and general (and cryptic).

My first impression from an hour of play last night is that it has promise for helping to understand the truly gigantic scale and 3D structure of our Galaxy (other databases even let you go beyond the Milky Way). It's rather cool to see the stars flying by with a real feeling of 3D, but the interface is a hard nut to crack (the documentation reads like a Unix manual - they need someone to write a "Go Play In Data"). The Hayden downloads (60 to 72 MB) include Partiview, various databases, and some student exercises.

I'll toy with this a bit more sometime, but I'll probably end up poking around our tiny Solar System most of the time in Orbiter, or looking at the sky from our familiar Earthbound perspective in Stellarium. I might have another look at Celestia - it goes beyond the Solar System too. I thought its interface was tough when I tried it, but having seen Partiview, maybe it will seem friendlier! At least it's purpose-built for astronomy.
Posted by FlyingSinger at 4:52 PM