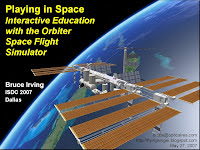 Although I’ve always followed developments in space, it’s only in the last couple of years that I started to do educational outreach related to space, first with written and on line materials, and more recently with presentations for students. ISDC 2007 was my first ISDC conference and only my second space conference (the first was the Mars Society Conference last summer in DC). I was struck by the diversity of topics, people, and points of view – it was really fascinating, and even a bit overwhelming - 11 technical tracks often made it difficult to choose a presentation to attend. Space is many things to many people, and space people are many things too. From veteran astronauts and NASA professionals to scientists and engineers of many stripes, to the fascinated and sometimes even skeptical "general public," perhaps the only truly common thread was a belief that space is a topic at least worth discussing.

I was lucky to have brought along my own near and dear “member of the general public,” one who has often been skeptical of my views on the vital importance of becoming a spacefaring civilization. I think she’s still skeptical of a lot of it (and rightfully so), but after attending three full days of ISDC presentations, she now has a broader perspective on space and on why it means so much to so many people. She reminds me that it's always important to think about "why" and not just "how."

Buzz Aldrin’s dinner speech was a bit rambling, but very entertaining and informative. He remains very active in promoting education and developments leading to private spaceflight. He mentioned his ShareSpace Foundation and his recent proposal for a spaceflight raffle, the plans for which are now in work. He didn’t really provide details, except to say that to buy a raffle ticket, you will have to be a member of a space advocacy group such as NSS.

NASA Ames director Pete Worden gave a presentation in Second Life (projected on screens at the real-world conference), talking about how virtual worlds can help with international participation and (perhaps) increase people’s sense of participation in space events. Astroprof described the session in more detail, and I have to say that I agree with him that it was more distracting than immersive. I think it’s worth pursuing as a sort of test bed – the technology is bound to improve, and there are many people who already find Second Life to be extremely engaging (at least socially). Or maybe I am getting old.

Dr. Steven Squyres gave a talk on the development, adventures, and accomplishments of the Mars Exploration Rovers, often stopping to credit individuals at JPL who literally saved the mission at various times. On a slide illustrating Opportunity’s remarkable bouncing landing directly into Eagle Crater, Squyres said there was no way to explain this, other than to “invoke the spirit of Tiger Woods.”

Alex Tai of Virgin Galactic showed a real video of SpaceShipOne and then an animated video of what the SpaceShipTwo experience will be like. He didn’t give firm dates but emphasized again and again that safety will be the driving force, although he agreed with a questioner who suggested that eventually a private space flight will end with a “smoking hole.” Tai said that the emphasis on safety combined with informed consent by participants would be the key to the survival of the industry should such a disaster occur.

My own presentation (“Playing in Space: Interactive Education with the Orbiter Space Flight Simulator,” title slide above, PDF presentation and handout available here) was also a highlight for me, of course, and it seemed to generate some real interest.

There’s lots more in my notes, but I’ll close for now. Later I will post a sort of “ISDC Blog Carnival” to point to ISDC related posts by other bloggers. This will be good practice for hosting the real Carnival of Space on June 7 – I hope my fellow space bloggers and others will submit any ideas or posts you would like to see included when I host the carnival next week.
Posted by FlyingSinger at 6:11 PM