Orbiter for Educators: Name That Moon 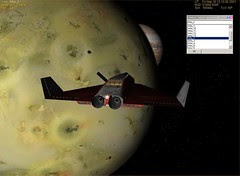 Next weekend I'm participating in a big educational outreach event for Girl Scouts in Rhode Island. It's called SMART (Science and Math Are Really Terrific), and I'm doing a space workshop. It's supposed to be hands-on, and it seems to be working out that I have a PC-equipped classroom so I can install multiple copies of Orbiter so the middle school girls can each have a go at playing in space (the event is at a university). Of course you never know with these things - I hope the PC's are up to the task of running Orbiter, and that I can really get the promised access to install it on them!

This means I need activities, and they have to be fun and something you can do without learning a lot about Orbiter (each workshop session is about 50 minutes). So I came up with three, a solar system tour and quiz (hoping to have some small prizes available), a "Moon hop" (hover and maneuver a Deltaglider from one pad to another at Brighton Beach on the Moon), and "final docking" with the ISS (starting from "hover" at 10 meters with slight misalignment to correct before docking). I've written brief cheat sheets for these things, and I'll also demonstrate.

For the quiz, I couldn't have them jump directly to the planets because they would then see the names directly. So I made a scenario with 13 spacecraft (Who_1 to Who_13) orbiting various bodies. You can press F3 to get the list of all the spacecraft, double click each one, and ID the planet or moon. Most are easy but there are a few tricks (like hiding a planet behind its moon at the start, requiring time acceleration to get around the moon to see the planet). I hope this is all somewhat fun and doable in 50 minutes - live testing next weekend.
Posted by FlyingSinger at 7:49 PM