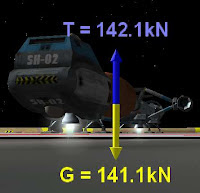 The "for dummies" thing seems to be permanently with us, alas, though I supppose that's better than "for the complete idiot" (another popular book series). Rocket Science for Dummies isn't a book, it's a web tutorial on applied orbital mechanics using Orbiter. It's been around for a few years (since 2004) and is actually quite good - it's one of the things that helped me learn Orbiter back in 2005 and then inspired me to write my full-blown tutorial book, Go Play in Space.

The original version of Dummies was written by "Windlepoons" as a series of posts in a gaming forum. Last fall "Enjo" (Simon Ender) updated the tutorial for Orbiter 2006 and posted it in four parts on "Falcoleprof's" excellent orbiterschool.com educational support site. It includes some starting scenarios, good diagrams, and good explanations to help you get up and orbiting (and even docking in part 4) in almost no time.
Posted by FlyingSinger at 10:33 PM