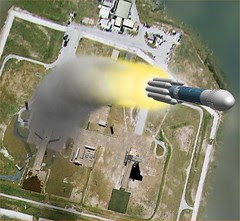 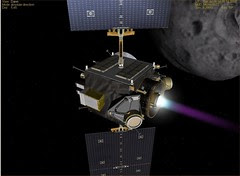 The Dawn mission to Vesta and Ceres can now be flown in Orbiter, thanks to an excellent new free add-on package by Brian Jones (available at avsim.com, registration required). This mission presents some challenges due to the ion engines, which have small thrust but are fired continuously over a long period of time. Most rockets and spacecraft use chemical rockets with relatively large thrust but short burn times. For maneuver calculations, such engines can be considered to produce an impulsive (nearly instantaneous) thrust which quickly changes the spacecraft's velocity and position, allowing the trajectories to be approximated as a series of simple curves (circles, ellipses, hyperbolas, parabolas). Engines are then turned off during the "cruise phase" of the flight. Calculations and guidance to reach other planets are relatively simple in this case (and supported by various Orbiter instruments or MFD's).

Ion engines make it harder. Since the spacecraft is under small but constant acceleration, its path is more of a spiral than a simple conic section. Orbiter doesn't have any good navigation tools for such constant thrust cases (like the Transfer MFD or IMFD which allow you to plan engine burns to get to a certain place at a certain time), but Brian has supplied a few new "autopilot" modes to at least help keep the spacecraft thrusting in a useful direction (e.g., prograde or retrograde). He also has some nice animations as well as solar panels that automatically track the sun.

This is a cool add-on, but for maximum value, you should also download Brian's Delta II Missions v.2 (so you can run the Dawn launch mission, maybe even launch this Saturday at the same time as the real launch) and Nighthawk's Asteroid Pack 1.00 (on Orbithangar) in which you can find Ceres, Vesta, and a few other major asteroids to carefully add to sol.cfg (solar system configuration file) in Orbiter. There are a few other requirements, so read the readme files and forum carefully on this one. More pix at Flickr.
Posted by FlyingSinger at 9:54 PM