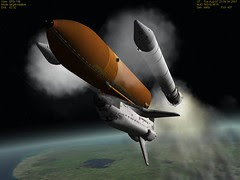 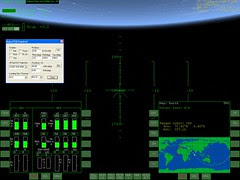 While there is no training required to attend a shuttle launch, I figure it doesn't hurt to be prepared. Prepared for what, you might ask? Prepared to discuss and perhaps even demonstrate Orbiter to some of the other educators and NASA folks who will attend the NASA STS-118 Education Conference in Orlando next weekend (I'll be there). And what better example to show than a simulation of STS-118 itself?

Thanks to the incredibly timely work of "David413" and a few of his Orbiter add-on development helpers, I can actually do this! The latest version of the "Shuttle Fleet" add-on (v3.9.4, July 27, available at Orbit Hangar) includes not only all the current and historical shuttles and scenarios for many recent and historical missions for each of them, but the accompanying "expansion pack" includes preliminary mission scenarios for STS-118, based on Endeavour's currently planned launch on August 7 at 7:02 pm EDT. Note that you must also download and install the latest "ISS Fleet" (v1.1.2) which contains models of the ISS in various stages of construction for use with the Shuttle Fleet scenarios.

This add-on has been under development for years, with new versions often released around the time of a shuttle mission. It is amazing in so many ways. From the automated launch (using item 777 in the "OPS 1" ascent mode in the included GPCMFD, which simulates several of the programs used on the real shuttle) to docking with the ISS, from simulated payload SRMS and SSRMS operations and EVA' to automated re-entry (with the included AutoFCS autopilot), it's a virtual playground for shuttle fans. You can even practice abort scenarios. For the TAL case (Transoceanic Abort Landing after loss of a single main engine), there is even a tutorial and an accompanying flight recording to watch and learn from.

I've been reading about shuttle operations for years (I just dug out my copy of the 1982 Space Shuttle Operator's Manual, bought in 1982), but the shuttle fleet in Orbiter is more than a detailed refresher course. Simulating different phases of a shuttle mission gives you a feel for the pace and complexity of a real mission, even if you don't have to memorize hundreds of switches and procedures (it's not quite that detailed). The screen shots from Orbiter show Endeavor two minutes after launch (SRB sep), and the AutoFCS setup dialog configured for an automated reentry and landing at KSC. More pix on Flickr.

Note: The Shuttle Fleet add-on defines an alternate solar system configuration file (Sol_Alt.cfg in which the only moon defined is the Earth's Moon) and Earth configuration file (Earth_Alt.cfg, which defines surface bases used for shuttle aborts, as well as a number of predefined observation points). The supplied scenarios all use these alternate versions, in case you are wondering what happened to Jupiter's moons).
Posted by FlyingSinger at 5:18 PM