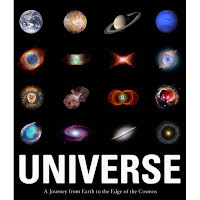 I'm a sucker for bargain books. A trip to Borders to get the final Harry Potter book for my daughter found me in the bargain section looking at (big shocker) space books. I found recent large-format paperback editions of two British titles by Nicolas Cheetham (the links below refer to British editions on Amazon.co.uk). Universe: A Journey from Earth to the Edge of the Cosmos is a series of large, high quality images of astronomical objects arranged by distance from Earth in light seconds, light minutes, or light years, from the Moon (1.3 light seconds) to the Hubble Ultra Deep Field galaxies (13 billion light years). A simple but effective unfolding of the cosmos. There isn't much detail on the objects' designations or locations, but you can find this in other books or on the web easily enough if you know the popular names. Pretty nice for only $5.99. 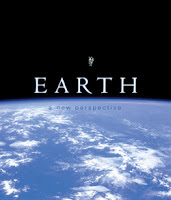 Cheetham's other book is called Earth: A New Perspective and it is similar in format to the Universe book, but with a wide range of satellite and astronaut Earth images, arranged in thematic sections labeled earth, water, air, and fire. Also $5.99 and great for browsing, even if you do have Google Earth and Orbiter to look at.
Posted by FlyingSinger at 12:07 AM