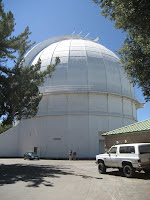 High above Pasadena, California, Mount Wilson is more or less the Mount Olympus of astronomy. It's where Edwin Hubble discovered that spiral nebulae are actually distant galaxies that lie outside our own Galaxy, demonstrating that the Universe is much bigger than was commonly estimated. From further observations of variable stars in these galaxies, and the red shifts of their spectra, he determined that the Universe is expanding (first published in a 1929 paper) and thus provided the basis for modern cosmology, leading to the now widely accepted Big Bang theory. Not bad for a night's work (it actually took a few nights).

Hubble based his work on photographic plates taken with the 100 inch Hooker Telescope (named for its financial backer), which was the biggest telescope in the world from 1917 to 1948. Today I got to see this amazing instrument on a tour of the Mount Wilson observatories. It was a beautiful day, and we had spectacular views of Los Angeles and the surrounding mountains.

There are a number of other instruments on the mountain, many of them quite old (the 150 foot solar tower was built in 1910) and most of them still in use. But it's not all historical instruments: the 6-telescope CHARA (not to be confused with Charo) array entered service in 2005. Using interferometer techniques, these six widely separated telescopes give the array the resolving power of a 250 meter aperture (though not the light gathering power, since each telescope has a 1 meter aperture, 2 of their silver domes shown here). In May, CHARA was used to make an image of the surface of the star Altair (distance: 16.7 light years) whose rapid rotation causes it to expand at its equator and shrink at its poles. Here's a diagram including an analogy that shows just how good CHARA's resolution is. Cuchi-Cuchi!

You can take a virtual tour of Mount Wilson here.
Posted by FlyingSinger at 12:50 AM