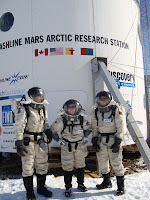 I just received an update from the Mars Society on the progress of the Mars analog simulation they are running at FMARS, their Mars surface simulation site on Devon Island in the Canadian Arctic. Four months is substantially longer than previous Mars analog missions, and they have reached the mid-point. The seven member crew has been staying "in sim" and conducting geological and biological field research, following procedures similar to what would be required on Mars, although of course life support requirements are considerably easier on Earth than on Mars, even in the high Arctic.

They have just started something new: operating on Mars time! A Martian "sol" is 39 minutes longer than an Earth day, and since the lighting doesn't change much through the day at their latitude (75° N) at this time of the year, they can operate on Mars time without being bothered much by changes in day and night lighting. This means they will fall out of sync with Earth time by 39 minutes a day, returning to Earth time in 36 days. Pretty wild, though it's not completely unprecedented for Earthlings to operate on Mars time. MER operations team members at JPL did this for a time in early 2004, just after the landings, in order to stay in sync with the rovers on Mars. They found it pretty exhausting and disorienting, like working nights, but worse, and as the rovers continued to operate well past their 90 sol "warranties," the MER teams went back to normal Earth time, scheduling operations and shift changes as needed to provide needed staff coverage. Of course the FMARS crew won't be surrounded by other people operating on normal time, so maybe it will work better.

You have to do something special for time keeping with a 24 hour 39 minute sol. The update says, "To simulate the longer Martian daily cycle, the crew will move its own clock backward 39 minutes per day, black out the hab windows between their clock's 6 PM and 6 AM to simulate night, and schedule meals, sleep cycles, and outdoor work accordingly." Sounds familiar, and not only from daylight savings time changes. In Kim Stanley Robinson's Red Mars, there is the idea of the Martian time slip, a 39.5 minute period between midnight and 12:01 that "stops the clock" each night to allow practical use of an Earth-like 24 hour clock despite Mars' slightly longer rotational period. It sounds like this is what they are doing at FMARS, more or less.

There's a lot of information around on Mars analog missions, including Robert Zubrin's 2003 book Mars on Earth. I also really like Anthony Kendall's FMARS journal of his two months on Devon Island in the summer of 2005.
Posted by FlyingSinger at 3:04 PM

Bruce,
I'm also very interested in following the progress of their experiment. I can't say that we ever considered doing it, perhaps simply due to lack of imagination!

What will be most interesting is to see how their "circadian rhythms" respond to this timeshift. Much of that rhythm depends on light, anyway, so perhaps the impact will be small. But, given the persistent strangeness of the arctic permasun that I did not manage to get used to in my much shorter trip, the impact on sleep cycles in particular might be a drag on the crew.