The Dawn launch has been postponed until September, because the available launch windows in July are limited after this weekend, and they did not want to run the risk of delaying the planned August launch of the Phoenix Mars mission. 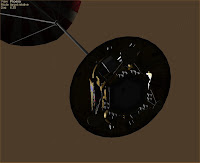 Speaking of which, there's a great Orbiter add-on for the Phoenix Mars mission too, courtesy of (you guessed it) Brian Jones (search for phoenix_mission_v2.zip at www.avsim.com). I tried it out the other night, with the dramatic night launch scenario as well as the Mars arrival scenario (I skipped the admittedly vital interplanetary navigation bit for now, though Brian provides helpful notes on using IMFD to navigate to Mars and set up an approach for the planned latitude and longitude).

Starting from the supplied Mars approach scenario (one hour before landing), with basically no user inputs, the spacecraft successfully enters the Mars atmosphere and performs an automated landing, with aeroshields, chutes deployed, landing rockets, the whole nine yards (the whole 8.2296 meters for you metric folks). You can then deploy the solar panels and camera mast and operate the robot arm. Unfortunately you can't drive it around - Phoenix is not a rover. But it's got a long robot arm and it can dig some pretty deep trenches (up to half a meter). There are on-board chemical analysis and atmospheric measurement instruments (and cameras), so hopefully it will dig up something interesting in the arctic regolith.
Posted by FlyingSinger at 9:39 PM