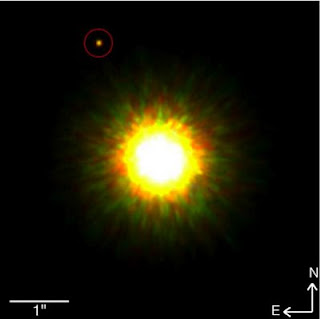 The Carnival of Space has a slightly unusual but timely host this week - the web site of the .astronomy conference that will be held in Cardiff, Wales next week (September 22-24).

.Astronomy is described as a "Conference on Networked Astronomy and the New Media," and presentations will discuss changes in how astronomy is done in an era of massive data from sky surveys, robotic telescopes and virtual observatories, blogging, social networking, and software tools such as Google Sky and Microsoft's World Wide Telescope, all linked together by the internet.

As usual, the carnival will steer you to recent posts from a number of interesting blogs. The picture above shows the star 1RXS J160929.1-210524 which is 500 light years away. Of interest is the object in the upper left which may be a massive planet orbiting this star. If confirmed, this would be the first direct image of a planet orbiting a sun-like star. Babe in the Universe explains more here. This was also the Astronomy Picture of the Day today.
Posted by FlyingSinger at 2:16 PM