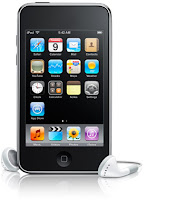 No, it's not Obama! Well, not in the same way. I'm actually in love with my new 16 GB Apple iPod Touch. I came very close to buying one of the first generation models when they came out (a year ago?). But I decided the lack of a hardware volume control was a deal breaker for using it in the car (turns out it probably would have been OK). I also thought the price vs. memory value wasn't that good with the first models. This one was $299 for 16 GB which seems like a good balance.

The WiFi web and email, the decent size screen for movies, the maps, YouTube, the whole touch-based interface - and of course the music - these are all very cool. And they work really well - I haven't read a word of documentation. But the apps that came over from the iPhone clinched the deal, especially the multi-touch Pocket Guitar. Not really that useful as a musical tool, and pretty awkward to play, but it's still the coolest 99 cent instrument ever. 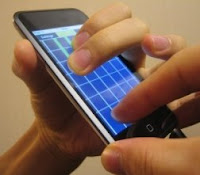 Whatever Apple's and Steve Jobs' faults, they create products that truly are a pleasure to use. I owned and enjoyed a Mac from 1984 to 1994 when practical considerations pushed me to PC's and Windows, and with rare exceptions, computers have just been tools for me since then. The iPod Touch reminds me of what it's like to experience geek love for a really well designed product, a pocket computer orders of magnitude more powerful than my original 1984 Mac.
Posted by FlyingSinger at 11:06 PM

Everybody wants to have the new Apple iPod touch. Unfortunately I can't afford to have it now. I just hope the price would change so I can buy one. I like it because of its thickness, WiFi, and excellent maneuverability, added with it's awesome screen.