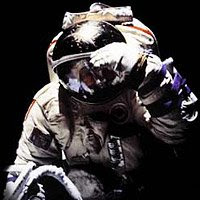 Thanks to a post on Orbiter-Forum.com, I just discovered a really cool web site on all things related to the Russian manned space program. Космонавтка (Kosmonavtka, "female cosmonaut") is the work of Suzy McHale, who hails from Melbourne, Australia (a lovely city I got a chance to visit two summers ago). It covers everything from the cosmonaut roster to the Soyuz spacecraft to personal hygiene kits (and much more).

I like the fact that she includes the Russian for many objects, names, and acronyms (there are brief Russian-English and English-Russian glossaries too). Why? Because reading words in the Cyrillic alphabet is about all that's left of the four semesters of Russian I took in college back in the seventies. I've kept my French and Japanese at a semi-useful level, but I barely used Russian after school and alas, it faded, except for the odd phrase like Где мой брат? and Я не знаю, я турист. Not very useful, I'm afraid, unless my brother happens to be kidnapped while we're on a visit to Moscow.

I really don't know as much about the Russian space program as I would like, so thanks to Suzy McHale for creating this very cool site. Спасибо большое!
Posted by FlyingSinger at 10:00 PM