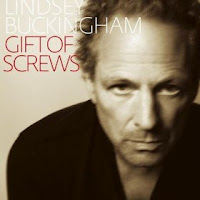 I have followed and enjoyed Lindsey Buckingham's music since the early seventies when I somehow discovered Buckingham-Nicks, the record he made with Stevie Nicks before they joined Fleetwood Mac. He's a fast and quirky guitar player, and his lyrics, rhythms, and production ideas can be pretty quirky too.

His new album is called Gift of Screws and I really like it, even though Lindsey himself doesn't appear too happy in the cover photo. It rocks more than his 2006 album Under the Skin. His flying fingers are in fine form and the lyrics and production are clever and off-beat. Listening to it this morning, I was reminded of his Fleetwood Mac song Tusk, which I experienced in an unusual way in 1980.

When we first moved to Pasadena, California in late 1979, we went to a few television show tapings, until the novelty of this free entertainment wore off. One of them was a pop music show called Solid Gold, and on the show we attended, Tusk was performed. Fleetwood Mac was unfortunately not there, so they played the recording, but there was another major performer on that record, the University of Southern California Marching Band, and they were on hand to perform live in the studio. It was pretty strange, but cool. Loud too.
Posted by FlyingSinger at 10:48 AM