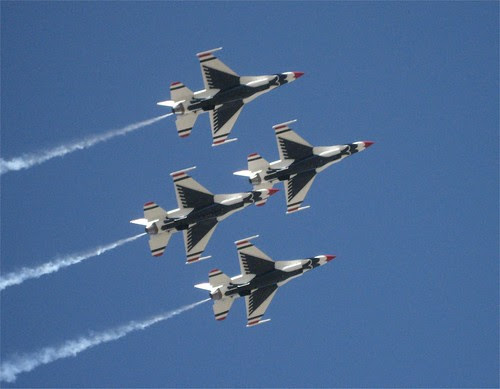 I went to the Great New England Air Show at Westover ARB in Chicopee, Massachusetts today. It was cool. The weather was terrible yesterday, so I and basically everyone in New England went today, leading to enormous traffic delays getting in and out. But it had been about three years since my last air show, and it was worth a little traffic frustration.

Eating junky air show food on the sunny tarmac, inspecting and photographing planes I've seen dozens of times, watching amazing aerobatic and parachuting performers - I've been doing this since I was ten years old, and it's still fun. I just love stuff that flies!

The USAF Thunderbirds were the featured act and I was happy to find that Thunderbird #5 (lead solo) was flown by a woman, Major Samantha Weeks. Major Weeks is not the first woman to fly the F-16 with the Thunderbirds (that was Major Nicole Malachowski in 2006), but she was the first I had seen perform. Of course she was amazing, as you would expect from a member of this elite precision flying team.

I saw some other interesting airplanes, including a ski-equipped LC-130, and I talked with the weapons officer of a B-52. I was sitting in traffic when the USMC AV-8 Harriers flew, which was a disappointment. I've seen Harriers in static displays at several shows but never saw a flight performance by this V/STOL aircraft (the one flown by Arnold Schwarzenegger in the movie "True Lies" - a very cool albeit highly implausible scene). I have a few more pictures on Flickr.

Posted by FlyingSinger at 10:18 PM