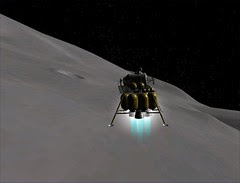 Francis Drake has created another great add-on for Orbiter, his third generation version of NASA’s proposed Crew Exploration Vehicle (CEV). This one is based on the latest NASA ESAS descriptions and visualization graphics, with an Apollo-like command/resource module, and a “super-LM” lunar lander, called the LSAM (lunar surface access module) or informally the CEV-LM. Since this model has hover engines, the Land MFD autopilot add-on by “LazyD” does a great job of landing it on the Moon. I decided to make the approach and the pictures a little more interesting by landing at Apollo 17’s rugged Taurus-Littrow site (using a nice add-on for this by “jtiberius” - search for tauruslittrow.zip at avsim.com). But this required a little experimentation and scenario tweaking since you need a starting orbit that passes very close to the landing site.

The easy thing is to just take the Brighton Beach landing scenario, accelerate time by 1000-10,000 times, and wait for the orbit path to pass over the desired target. This works fine, but it took two weeks of “real time,” and guess what happens in two weeks on the Moon? It rotates and daylight sites get dark! The Land MFD doesn’t care, but I’m sure the astronauts would. Simply turning back the scenario date doesn’t work because Orbiter knows how the Moon and Sun move, and your track no longer passes over the target.

Time for another approach, in this case a very handy utility written by Trevor John, Orbit Calculator 2.0 – not an add-on, but a cool standalone utility. It allows you to specify the body (Moon in this case) and the desired orbit parameters (date/time, periapsis and apoapsis altitudes, and latitude/longitude offsets – also retrograde or “westward” orbit in this case). I specified a 30 x 150 km orbit with latitude offset of -20.19°. I grabbed the RPOS and RVEL cordinates for the calculated apoapsis (high point of orbit) and pasted those into the provided Brighton Beach landing scenario file, replacing the existing values. I got lucky, because this passed directly over Taurus-Littrow (lat. 20.19° N) on the first try (I assumed I would have to experiment with longitude offsets as well). I fired up Orbiter with the Land MFD, and it made a perfect landing.

This “alpha” version doesn’t yet have a separate ascent stage (it's a basic configuration-file vehicle, no custom DLL), so you can’t launch from the Moon and dock with the CEV-CM yet. But it’s a pretty amazing work in progress! More pix at Flickr.
Posted by FlyingSinger at 10:00 AM