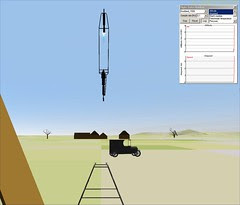 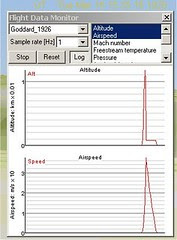 Robert Goddard launched the first liquid-fuel rocket from his Aunt Effie Ward's farm in Auburn, Massachusetts on March 16, 1926. This is just south of Worcester, not far from where I live. The field has long been a golf course, and there are markers there indicating the historic launch location. I've visited the small Goddard Memorial Park in Auburn, but not the launch site itself.

This third post of the day was prompted by the re-discovery of Mark Paton's "Early Rockets" add-on for Orbiter. I had it all along, but I was searching for a file called "Goddard" something, and Mark's add-on covers the very early German and Russian rockets as well as six of Goddard's designs (hence the name "early rockets"). There's a great PDF manual (lots of historic background and diagrams) and a number of scenarios.

So I decided to do some quick flight testing at Ward Farm Spaceport, using the Flight Data Module that comes with Orbiter (activate it in the module tab of the Launch Pad dialog, then open it with Control-F4 or from the Orbiter menu). This creates a little window where graphs of your selected flight data are displayed (and can be logged to a text file). I chose altitude and airspeed, and I used the Map MFD to get the flight distance by setting "Ward Farm Spaceport" as my target base.

Following the suggested procedure (in scenario comments), my results were close to Goddard's, about 12 m altitude, and about 60 m down range distance, flight time about 3 seconds. Hey, the Wrights didn't go far on their first flight either.
Posted by FlyingSinger at 1:37 PM