From Tsiolkovsky to the CEV 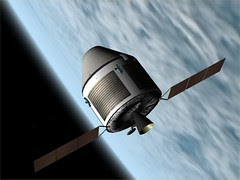 Jet-lagged rambling from a Lufthansa lounge at Frankfurt - a brief reprieve before the expected India web blackout this week. The Boston snowstorm was a real nightmare - crazy ride to the airport, many canceled flights - but mine was only late. De-icing took about 45 minutes, but you don't want to mess with the shape of those 747 airfoils, so I say take all the time you need and get all the snow and ice off. It was originally an 8 hour layover for the Delhi flight, so even though we were hours late, I still have a few hours to kill.

I just started reading This New Ocean, "pre-history" stuff so far. It's amazing how much Tsiolkovsky got right in his technical predictions of space flight (writing in the late 19th and very early 20th century). It's also amazing how closely his vision of the human future in space matches the vision (if not yet the reality) still held by many modern space advocates (including me, more or less). He was a true visionary.

On another note, Francis Drake is continuing his series of CEV models for Orbiter with an alpha release (announced on Orbiter forum) of the Apollo-like CEV that has appeared in recent NASA concept art. I installed it to have a quick look, and it looks pretty good (sample above, "first mission to ISS in 2014" - more views on Flickr). I also read a good article about t/Space in the new Air & Space magazine, and I hope their CEV-alternate (CXV) works out, gets more funding, and is able to start visiting the ISS before 2014! And if not them, then someone else. I know time flies, but 2014 just seems so far away.
Posted by FlyingSinger at 4:31 AM