Orbiter: Flight of the Uglybug 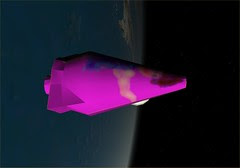 Well it ain't pretty, and it's primitive, but it's mine. Just to see how it's done, I created my own "spacecraft" for Orbiter. I call it the Uglybug. It's a limited edition - this will be the only picture ever shown! I also have renewed respect for modelers and add-on makers who make things they want to make and make them look a lot like a real spacecraft (this was sort of random). I'm sure with practice I can get better, but this was just a 2-3 hour exercise with software I never used before, and it served its purpose. Thanks to Harmsway whose basic "UFO" tutorial got me started.
The basic steps of making a spacecraft for Orbiter are not as hard as I thought they would be, but making something polished and complex will clearly take more time and work.
Posted by FlyingSinger at 10:52 PM

I can empathize with your experience. A while back I tried to create the Merganser from Charles Sheffield's MacAndrew Chronicles. It was really just a very large disk with a long spike sticking out one side, but it was good experience and my first Orbiter add-on.

I've been too busy lately to do much with Orbiter, but once the current semester is over I plan on getting back into it. I've been contemplating using it as a simulation tool for sometime now. I've been thinking of developing an application for rapidly prototyping rocket designs and outputing the designs in an Orbiter compatiable format. The designs could then be flown in Orbiter to see if they are capable of meeting their mission objectives. I'd love for this to be my dissertation research, but unfortunately it will have to remain a hobby project for the time being.

Thanks for the note. My immediate motivation is the book "The Rocket Company" which I wrote about the other day. It's really cool, with piloted first and second stages and very interesting flight profiles. Andy McSorley is helping a bit with the meshes, and I'm hoping to master enough of Vinka's spacecraft2.dll and/or multistage2.dll to be able to test fly the stages. Ultimately I'm hoping to get one of the more advanced modelers like Sputnik or Francis Drake interested - someone who could do things like animate the gear, the first stage landing engine doors (they are turbofans), and the "flower petals" that surround the first-second stage connection and provide added structural stiffness and (on descent) additional drag to slow the descent.

What's your degree program in? What school? Just curious.

I am currently working towards a PhD in Computational Engineering at Mississippi State University. Basically, I'm learning to develop computational simulation tools which can be used by engineers to do design and analysis. My intention is to be able to apply what I have learned to help design the next generation of rockets and spacecraft.

If I get some time in the next week or so, I'll sketch out my idea for my hobby project in a little more detail over on Spaceflight Sandbox.