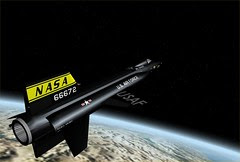 Greg Burch has created some amazing Orbiter add-ons, most of which focus on late-21st century possibilities for space planes and space stations. His 3D modeling is really superb. But in September he released a historical add-on (working with Scott Conklin), the X-15 Project. It's a real beauty.

This is an example of a single add-on for Orbiter that could practically be a separate flight-sim product (if it didn't happen to be a free add-on for a free space flight simulator). Greg and Scott implemented four variations of the X-15, and obviously devoted a lot of time to flight modeling in addition to graphics modeling. The package includes the B-52 that launched the X-15 and a PDF "flight manual" that graphically simulates the 1950's era manual for the real thing. Talk about attention to detail.