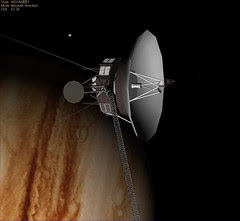 Just before the holiday rush, I finished This New Ocean, William Burrows' wonderful history of "the first Space Age." Although I have followed space flight developments since my childhood in the sixties, this book really put it all together for me, and the scope and depth of what was accomplished between 1957 and 1998, presented in this integrated fashion, is truly breathtaking. I am struck by many things, and I'll just mention a few off the top of my head.
I could continue the series of posts tying various milestones of the Space Age to the wide range of available historical Orbiter add-ons, but I've decided to do a paper or presentation on that instead, a brief history of rocketry and space exploration, dynamically illustrated with Orbiter (yet another TBD, soon I hope). I will make one last connection -- to JPL's Voyager "Grand Tour," a program that barely survived the political turf and budget battles of the 1970's. But survive it did, serving as humanity's eyes and ears in our first truly close-up look at the outer reaches of the Solar System (Jupiter, Saturn, Uranus, Neptune, and many of their moons). This was truly a magnificent accomplishment. The graphics (more on Flickr) are from a Voyager add-on available at Orbit Hangar.

Note: Actually I combined a couple of add-ons here. Jim Williams' add-on includes enhanced textures and configuration files for the four Galilean moons as well as a Grand Tour scenario (.scn) file which assumes another, older Voyager model. There is a better version of the Voyager spacecraft mesh by John Graves available here, so I also installed this add-on, then edited Jim's .scn file to change the string VOYAGER3 to VOYAGER1 (two occurrences) to use the more realistic Voyager mesh.
Posted by FlyingSinger at 6:26 PM