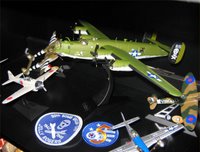 I like airplane models. When I was a kid, I was obsessed with them, and I built dozens from plastic kits, starting when I was maybe 9 years old. Most of them were military aircraft, and mainly jets, since I wanted to be an Air Force pilot. I still remember my excitement when I saved the money to get a 1/72 scale model of the B-52 (I think it was a Monogram model, though I recall that I generally preferred Revell kits). That thing was huge! The B-52’s wingspan was 185 feet, or 31 inches for the model. I remember building a few large scale models too, a 1/32 scale Huey Cobra comes to mind. I may have built some WW2 planes in 1/32 also, but I think most of my models were 1/72 or 1/48. I was a fairly careful modeler, concerned with correct paint schemes and decal markings, but I wasn’t a custom modeler, and I think my assembly quality was only fair. I really wanted to see the completed model, so I probably rushed the building process many times.

I would occasionally dabble in non-aircraft models. I built a few modern ships, especially aircraft carriers and submarines. Of course there were some spacecraft too. I remember building the Apollo CSM and LM, and also the Gemini spacecraft (that may have been large scale). I never built cars – heck, you could see real cars every day! Except for James Bond’s Aston-Martin DB5 (with various secret agent mods). That was a special case.

I think part of Orbiter’s appeal for me is related to this nostalgic love of models. The models in Orbiter are virtual, but the 3D graphics quality gives you a really good feel for what they are like, and some add-on developers do an amazingly detailed job. Plus you can fly these models – and not just by zooming them around making airplane noises. As far as physical models, I just don’t have the time to build them any more, but I have bought a few 1/72 die cast models for old time’s sake. The picture shows a few of the WW2 models, including a 90th Bomb Group B-24 (my father-in-law was a pilot in that unit in New Guinea in 1942-43, before they were called the "Jolly Rogers," read the story here). And yes, I still sometimes zoom them around and make airplane noises.
Posted by FlyingSinger at 6:47 AM