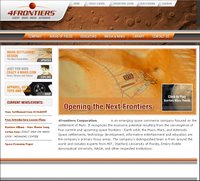 I just received an email from 4Frontiers Corporation indicating that their new web site is up, and it's pretty impressive, with improved design and organization, new content, and even a "just for kids" area called Crazy4Mars.com - cool!

There's also an extensive report on the launch meeting for their Generation II Mars Settlement Study that I mentioned in a recent post. I wondered then why there wasn't more information about Gen II on line, but they were just about to launch the new site, and now here it is, along with tonnes of other Mars information: previous studies, educational materials, comics, even some music. Material like this makes the idea of Mars settlements more tangible even though there is still so much to be done. I'm looking forward to hearing more about the settlement study as it develops in the coming months.
Posted by FlyingSinger at 9:56 PM

Bruce,
I'll keep you posted on the Gen II study as much as possible, though the problem is I signed a Non-Disclosure Agreement that I'm pretty sure prevents me from talking about anything. It's a bit stricter than I expected, because 4Frontiers is looking to turn intellectual property into revenue.

So, as soon as I know what can be shared, I'll post something to my blog about it.