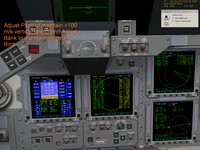 I haven't had much time for Orbiter these days, but I noticed a recent tutorial flight recording uploaded by Russ "Reverend" Purinton on Orbit Hangar that looked interesting, and I tried it out tonight. It uses the standard space shuttle Atlantis (not the Shuttle Fleet add-ons) and covers launch to orbit (necessarily manual with the Atlantis since it lacks a launch autopilot), various orbit adjustments, and rendezvous and dock with the ISS. With included time acceleration segments, it takes about 45 minutes to play back (almost four hours real time), and it includes extensive instructional on-screen text to explain everything that was done.

This tutorial is very well done and makes good use of the new Atlantis virtual cockpit that allows 7 or more MFD's to be displayed at once, so all the MFD's needed for orbit adjustments, plane alignment, orbit synchronization, and docking are all available by panning and zooming the virtual cockpit view. You can still switch to external and other internal views as desired. Very cool.

Note: As pointed out in the playback notes, you can use Control-F5 to bring up the time acceleration panel and uncheck "play at recording speed" if you want to override the recorded time acceleration (100x used mainly on long orbital segments between maneuvers). Also for some reason the playback does not open the payload bay doors (although it was done in the original flight), but you can open them manually as soon as you reach orbit, even in replay mode, using Control-Spacebar to access the payload bay control panel. This is critical in real life shuttle operations (for thermal control), but is only really necessary in the simulation when you reach the ISS, since the docking port is inside the payload bay.
Posted by FlyingSinger at 8:52 PM

thanks...recently a user wanted me to make a video and post on youtube on how to dock the shuttle..i will go and find this and use it as a means of teaching myself how to dock in order to make the video..thanks
-deltawing777