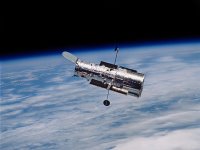 It was expected but still very good news indeed that NASA will send a shuttle in 2008 to perform a fifth servicing mission (called SM4) on the Hubble Space Telescope. I heard from a NASA contact that 65 astronauts had signed a petition to go service Hubble. Seems it's a very popular spacecraft with astronauts as well as with the general public. It's also good that NASA will address the safety concerns by having a second shuttle ready to launch in case the first one runs into trouble, since Hubble provides no safe refuge as does the ISS on space station missions.
Posted by FlyingSinger at 10:48 AM

I've been thinking for a while now that it would be cool if Bigelow Aerospace could get it's Sundancer module ready in time for the Hubble servicing mission. That way, they could launch it, fully stocked, into a compatible orbit with the Hubble and have it standing by as a safe haven in the event that something goes wrong. Even if nothing goes wrong, they could still pay the module a visit. It would be an excellent opportunity for Bigelow to test out proximity operations and docking with an actual manned vehicle perhaps years before a viable private sector vehicle becomes available.