Another (Simulated) Way to Mars 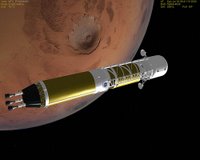 Although we are still tweaking, testing, and documenting the Mars for Less add-on for Orbiter, Andy McSorley is also making great progress on an Orbiter add-on version of another Mars mission model. His new project is based on a variation of NASA's "DRM3," a "hybrid" design reference mission that originated in 1998 and is described in detail here (5 MB PDF).

DRM3 assumes the development of a LANTR engine (LOX augmented nuclear thermal rocket) to provide a high specific impulse (Isp ~850-1000 s) propulsion solution for the trans-Mars injection stage of the MTV (Mars Transfer Vehicle, shown above). Andy's model also includes an inflatable "TransHab" module to expand the habitable crew volume, and a number of other cool components and features. You can see some of the detailed work he is doing (including cutaway and translucent views of the TransHab) on Andy's Flickr site.

In what sense is DRM3 a "hybrid" mission? By this I mean that it combines attributes of previous NASA DRM's with some ideas made popular by Dr. Robert Zubrin in his Mars Direct approach to human Mars missions, in particular the idea of sending one of the spacecraft used in the mission to Mars in advance of the crew (typically called the ERV or Earth Return Vehicle, though it would not return to Earth in the DRM3 case). Once on the surface, robotic systems are used to manufacture propellant (methane and LOX) for later use (in situ resource utilization, ISRU, see this site for an excellent discussion of ISRU and many other aspects of human missions to the Moon and Mars). This reduces the total mass that must be carried to Mars.
Posted by FlyingSinger at 12:41 PM