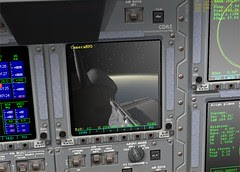 I've just tried out an extremely clever new add-on for Orbiter, the CameraMFD by Mike Richer ("Vanguard"). The second public beta (v0.11) is available on Orbit Hangar, and it seems to work well, especially considering that the conventional wisdom was that you couldn't do such a thing in Orbiter! He's essentially rendering a second, independently controllable 3D view inside an MFD screen.

There are some limitations, e.g., you have to be in virtual cockpit mode to see the ship you're in (which means the ship must have a VC, and many don't). In 2D mode, Orbiter doesn't render the ship you are in, so all you can see is an external view in the MFD (including other ships such as the ISS if you are trying to dock with it). This is still cool because you can control the direction, field of view, view angle, target tracking, and even "night vision" mode for those really really dark times on the dark side of whatever you are orbiting.

So far I've only tried it in the default shuttle Atlantis and in the Delta Glider. Mike apparently plans to add support for an attachment point on the shuttle's RMS (robot arm), which means you will be able to get camera views from there as they do in the real shuttle. Very nice job. I'm sure there will be some clever applications for this thing from the Orbiter community. One person mentioned using it to track a shuttle launch from a remote aircraft.
Posted by FlyingSinger at 8:29 PM