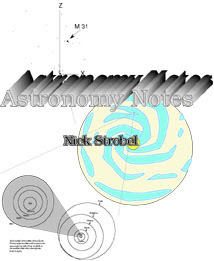 I recently discovered an excellent on-line resource for astronomy and planetary sciences, Astronomy Notes by Nick Strobel. Although it covers the same ground as many astronomy education books and web sites (at the level of an introductory college astronomy course), I'm especially impressed with the way Strobel "unfolds" the complex subject matter, and with the clarity of his explanations and many diagrams. The diagrams are not especially artistic, but they cut to the heart of what is being explained better than many I have seen.

It's also nice that he often gives and shows examples - examples of calculations when equations are presented, as well as pictorial examples. In the section "Evidence of Warped Spacetime" (part of the discussion of special and general relativity), I like that there are both simple diagrams of gravitational lensing, and on the same page, Hubble images that show this effect.

Note that astronomynotes.com is the original version of Strobel's notes, parts of which have often been duplicated elsewhere, generally without the author's permission. It's a great resource, so use and give credit to the original. Strobel seems to be continuing to update it (I saw revision dates as recent as September 2006).
Posted by FlyingSinger at 5:08 PM

We are proud to present a splendid writing company for university students who are sometimes deadlocked with their tasks. Don't bother about well-timed help on any given problem or theoretical theme of any kind. We can easily solve all of your problems with any kind of research proposal example making the most strong efforts. We do our best to enlighten ideas properly in formal and literary forms for your personal instruction.