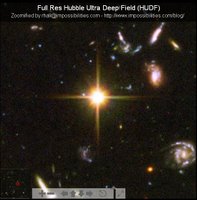 Optics and space, always a good combination for me. There's a good overview of the improvements that will be made on the Hubble Space Telescope by the now planned servicing mission in 2008, including a third-generation Wide Field Camera (WFC3) and the new Cosmic Origins Spectrograph that will greatly improve Hubble's ability to detect ultraviolet light.

The current WFC was used to make the famous Hubble Ultra Deep Field (HUDF) image that went "back in time" further than ever before to reveal galaxies in the earliest stages of formation. I found a great "zoomified" version of HUDF (screen shot pictured). WFC3 will be almost an order of magnitude more sensitive than WFC2 - could Hubble go deeper yet?
Posted by FlyingSinger at 7:53 AM