Blogs on a Plane 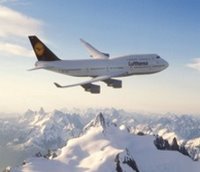 Here's a first for me: blogging from the air. I'm on a Lufthansa 747 somewhere over the North Atlantic, flying from Frankfurt to Boston, the final leg of the long trip home from New Delhi (which started at 3 am India time Sunday morning). Lufthansa has WiFi (a Boeing service) on many of its international flights, but for various reasons (including exhaustion and no room to work in most coach seats), I've never used it before. This time I have a bulkhead seat and my jet lag plan has gone out the window thanks to the 3 am departure and the stop in Frankfurt, so I'm pretty alert now, but will proably pay for this later.

India was interesting, a very useful business trip, and I did get to visit the beautiful Taj Mahal yesterday (which involved many hours of driving, always an experience in India - fortunately the driver had lightning reflexes, a basic requirement to survive on the chaotic India roads). It was only about 8 days but it feels like I've been gone forever. I finished several books on the trip, Baxter's Evolution (wonderful, mind-blowing book), Steven Johnson's Mind Wide Open (on my list for a long time, also great), and a surprise re-read of Carl Sagan's Cosmos (I found a cheap used copy of the paperback in a hotel gift shop). Cosmos is a little dated in terms of astronomical discoveries made since the early eighties (many of the things that Sagan mentions will be possible in decades to come have come to pass, including the Hubble, discovery of many extra-solar planets, and Mars rovers), but it is still an excellent read. Sagan's sanity and clear writing are always refreshing.
Posted by FlyingSinger at 10:01 AM

Bruce,
I finally picked up a box-set of the Cosmos series on DVD yesterday. My wife and I watched the first episode and just sat in awe at the mastery he has with the subject and communicating it.

I'd read the book before (and loved it), so much of it wasn't new information. Nevertheless, the video version is much more captivating.