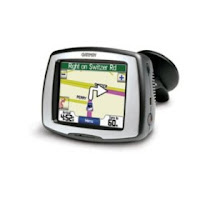 My favorite down-to-Earth space application is GPS. I secretly had a simple Magellan 315 back in my student pilot days (2000-2001). I say "secretly" because I wasn't allowed to use a GPS for navigation as a student pilot, though I used it on my solo cross-country flights anyway, to back up my visual, chart, and VOR flight planning and navigation. I bought an add-on aviation database for that GPS (it was mostly intended for boating and hiking but it worked great in the air). Apart from my CFI's rules and the fact that I was only flying VFR, that GPS was not certified for aviation use, so it couldn't be anything more than a backup navigation device anyway. It was cool to know my real groundspeed all the time.

For the last few years I've had a small Garmin GPS for the car, probably one of the last non-touch-screen models they made. We used the British English voice and called her Lucy. Lucy helped out on many road trips but her ~2006 database was getting a bit dated and would cost about $70 to update. So I looked into other Garmin units and bought a StreetPilot c550 for $184 from Amazon (now it's $170!). This is a highly rated 2006-era touch-screen GPS that is compact but not super-slim like the latest ones, so I guess that's why they are discounting them. When I registered the new GPS with Garmin.com, I got a free update to the latest 2009 firmware and North America navigation database, which I downloaded (2 GB!) and installed.

It's a fantastic little device. My new road companion is a saucy Australian girl named Karen (she's actually a synthesized voice who unlike Lucy can pronounce street names). The c550 also comes with an FM radio receiver cable and a three-month trial subscription for real-time traffic reporting. It displays and navigates around construction, accidents, slow traffic, etc. There are thousands of "points of interest" (POI) built in, and you can add your own for various things including audio-visual guided tours that some people record and provide on the web. It even includes an MP3 player - not that I need that in a GPS.

My only disappointment is with another unexpected feature, Bluetooth cell phone support. This allows you to use the GPS on your windshield for hands-free phone calls. It's got some great features, but unfortunately it won't stay connected to my Blackberry's Bluetooth, even though I updated to the latest firmware and software. I don't talk on the phone that much in the car, and I have a Bluetooth headset for when I need to be hands-free. So I won't hold this against Karen or Garmin.
Posted by FlyingSinger at 3:29 PM