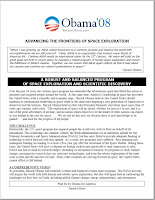 As reported by Jeff Foust in The Space Review this week, space policy is heating up this summer. In apparent reaction to Obama's recent Florida remarks on space, John McCain's web site was updated with an expanded article expressing support for NASA and for human and robotic space exploration.

Now the Obama campaign has expanded even more on Obama's Florida remarks with a seven page PDF position paper entitled "Advancing the Frontiers of Space Exploration." This is quite detailed and includes ideas for better coordination on space activities among federal agencies, more support for private space activity, and better use of NASA's resources to educate the public and engage more students in science and engineering.

Saying something doesn't make it so, I know, but establishing space exploration as an important part of America's future is a good first step.
Posted by FlyingSinger at 5:38 PM