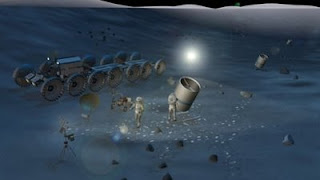 When I was a kid, I fell in love with flying and with space. I was 9 to 16 years old in the core space age years of 1962 to 1969, from John Glenn's first orbital Mercury flight to Apollo 11 landing on the Moon. I was also a cadet in Civil Air Patrol for several years in that period, learning aerospace subjects and taking a lot of Piper Cub orientation flights that gave me my first experience in controlling an airplane (cadets could do everything but land).
I did everything I could to learn about space and aviation. In the sixties, I had network TV, LIFE magazine, and a lot of reports and posters that I requested from NASA and the US Air Force. I read library books, and when I occasionally got to the big library in Glens Falls, NY (we lived in a rural area and I usually got books from the Bookmobile) , I would read space mission reports in Aviation Week magazine. I also built a lot of plastic models - mostly military aircraft, but I also built every available spacecraft model - Mercury/Atlas, a large-scale Gemini spacecraft, and of course the Apollo spacecraft and Saturn V booster.

Now in the age of the world-wide web, the amount of material that is available to someone interested in learning about space science and engineering is really staggering. In addition to NASA's huge presence on the web, there are many other sources of space and aviation information, pictures, and video. We have flight simulators, including Orbiter, an excellent and free space flight simulator. We even have aerospace courses from MIT available on the web!

The latest space course from MIT's OpenCourseWare program is 16.89J from spring 2007, Space Systems Engineering. The project theme of this particular class related to the design and development of possible lunar telescope facilities, including scientific and technical issues as well as project management, budget, timeline, and other "big picture" issues. The materials for this course are limited compared to some MIT OCW courses. No PDF, audio, or video lecture materials are provided, but they do provide PDF's of the final Lunar Telescope Facility class presentation and report which are pretty impressive.

One of the most complete space-related OCW courses is Aircraft Systems Engineering from fall 2005, which focused on the space shuttle. Instructors included MIT professor and former astronaut Dr. Jeff Hoffman, and the OCW material includes lecture notes, audio, and video. A more recent one that also looks cool is Engineering Apollo: The Moon Project as a Complex System from spring 2007. No videos, but it does have brief lecture notes and a number of student reports from the class, plus some historic NASA documents.
Posted by FlyingSinger at 10:29 AM