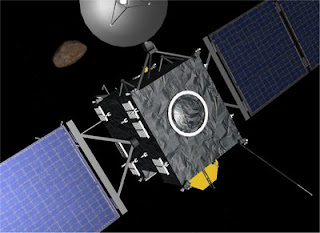 Emily Lakdawalla of the Planetary Society wrote an interesting piece last week, "Things that probably won't ever be called planets, but maybe they should." It's a reasonable sounding approach to the "planet debate" that was triggered by Pluto's "demotion" - "planet" is not a status to aspire to, but simply a name for an object that is smaller than a star, a name that can be qualified as needed with many descriptive words: terrestrial, gas giant, ice giant, dwarf, minor, etc.

But whatever you call them, there are many objects worth exploring here in our solar system, and we have already sent spacecraft to visit many of the "minor" ones. Emily provides a photo album in this post. She also made a collage of all of the visited objects at a common scale, which she posted today. The 1600 x 1200 png file (537 KB) is really cool - it's quite an impressive range of sizes.

This also reminded me that ESA's Rosetta spacecraft will soon be making a flyby of asteroid 2867 Steins on its way to a May 2014 rendezvous with comet 67P/Churyumov-Gerasimenko. The picture above shows Rosetta (add-on by Brian Jones) with Steins as simulated in Orbiter. I'm at 145 km, a bit closer than the intended 800 km distance for next week's flyby.
Posted by FlyingSinger at 2:26 PM