I still read a lot of books. I haven't bought an Amazon Kindle, though I've been tempted a few times. The main drawback (aside from cost) would be having to carry around another device. I travel with a laptop PC, a Blackberry, and an iPod Touch. It's not so much the weight or bulk of the Kindle (something like 10 ounces, 289 grams), but it's another thing to think about, keep charged, not lose, etc. Fortunately Amazon makes a free Kindle Reader app for the iPhone and iPod Touch, so I've been able to get the benefits of Kindle e-books (easy to carry multiple books, relatively low cost) without an actual Kindle. 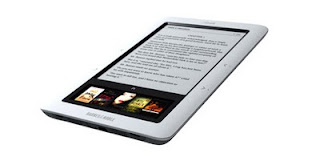 Now Barnes & Noble has muddied the waters for me with its new nook e-book reader. It's the same size and cost as the Kindle 2 ($259) and uses the same e-Ink screen technology to display the books. But it has an additional color LCD screen used to provide a touch-screen interface and a number of additional attractive features (direct PDF support, AT&T wireless plus WiFi for downloading books, memory expansion, replaceable battery).  In a clever marketing twist that leverages their many brick-and-mortar stores, BN will allow you to read any e-book for free via free WiFi inside any of their stores. You can also lend an e-book to a friend with a BN account, which is cool (only 14 days, only once, and you can't access the book while it's "checked out," much like a physical book).

But perhaps most interesting (for me anyway) is their expanded support for other devices. Like Amazon's Kindle, they provide a free e-book reader for the iPhone and iPod Touch. But unlike Amazon, they also have compatible reader applications for Blackberry, Windows PC's, and Macs. I can't see reading on the Blackberry if I have the iPod Touch available, but I've already installed and tried their PC e-reader and read parts of a purchased book on both the PC and on the iPod Touch. I had to unlock the book for each device (with the credit card number used for purchase, a slight inconvenience there), but otherwise it's great to have the option of looking at a much bigger page when I have my notebook available (though the iPod is much better for reading on planes and in bed).

This multi-platform support might lead me to buy more e-books from BN rather than Amazon, similar to the way I buy most music now from Amazon rather than iTunes (mainly because Amazon's MP3's are more portable than Apple's proprietary music format). Will it lead me to buy an actual nook? I don't know, but I certainly will go into a Barnes & Noble and try one out (another advantage of BN's physical stores).

Competition is cool (sometimes)!
Posted by FlyingSinger at 9:57 PM