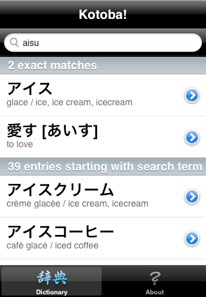 I finally found the Japanese dictionary of my dreams, and it's on my iPod Touch. It's called Kotoba and it's a free app that is based on a huge database of Japanese language knowledge developed by Jim Breen. Kotoba is developed by Pierre-Philippe di Costanzo, and he has done an amazing job. It has some 133,000 Japanese words and English translations, with a smaller number of French and German words as well (I kept the French active so I can use it as an English/Japanese/French dictionary in any combination).

The cool thing is that you can enter any language at any time - it will figure out if it's English, Japanese, or French (or just find it in the database) and display the corresponding definitions. It makes use of the Japanese keyboard if you activate it (for romaji/kana entry with conversion to kanji, though Kotoba works just as happily with the English keyboard entry). This is all amazing, but wait, there's more. He also allows you to use the traditional Chinese keyboard (you have to activate it in the iPod settings app) which includes a drawing pad with character recognition - so you can sketch an unknown character and select the right one from several displayed candidates. It somehow maps this Chinese input into Japanese kanji! This works quite well for the basic characters I know, but there are some that give "no match" (there is no sketch pad specifically intended for Japanese, I assume because most Japanese users are used to phonetic entry with on-the-fly kanji popup menus which is a standard part of the iPod software).

I bought dozens of Japanese-English, English-Japanese, kanji, and other dictionaries over the years I was seriously studying Japanese. I even bought several dedicated electronic ones like the Canon WordTank. This little app seamlessly integrates all of them (yes, it has detailed kanji dictionary information and even animated stroke-order diagrams for many of the kanji). BTW, it's a 60 MB app because all the databases are local (no need to be online to use this app).

Shinjirarenai! (Unbelievable). I'm glad I'll be going to Japan later this fall so I'll have an excuse to get back into Japanese for a bit and use this little gem.
Posted by FlyingSinger at 11:11 PM