NASA In My Pocket 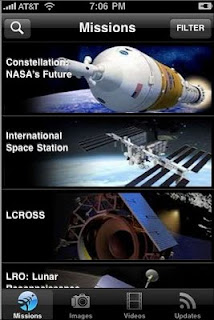 I occasionally check iTunes for any new iPhone/iPod Touch apps that might be of interest, especially free ones.  Tonight I found a brand-new NASA app for iPhone, called (appropriately enough), "NASA app for iPhone." It's free and works also on iPod Touch (needs WiFi connection).

This app offers a handy way to learn about and track NASA missions with photos, videos, a mission orbit tracker (e.g., a map shows where the ISS is now), and NASA Twitter Feeds and Mission Updates. It's nice how this app integrates access to all sorts of NASA resources, many of which are actually separate web sites run by separate NASA centers.

This is especially convenient for me because for some reason, the security software on my notebook doesn't like the nasa.gov web site and won't let me load it without temporarily turning off the firewall, which I really hate to do (oddly enough it has no problem with jpl.nasa.gov, but most other nasa.gov URL's will not load).
Posted by FlyingSinger at 10:55 PM