I recently got an offer to subscribe to Popular Mechanics for only $5 for the first year so I signed up. I've always liked PM - it covers a wide range of topics from DIY home and auto repairs (not my forte) to various aspects of high technology. They sponsor an annual "Breakthrough Award" for inventors, and the November issue has an article on this year's winners (there are also video clips demonstrating the inventions). There are several interesting "flying machines" among the ten winners, including NASA's Kepler spacecraft, a high-speed coaxial rotor helicopter from Sikorsky, and a flying dune buggy (second flying car this month!). But my favorite is the "Mini-helicon plasma thruster" invented by MIT astronautics researcher Oleg Batischev.

The innovation here is the simplicity and low cost of this ion engine compared to previous plasma engines used (for example) on NASA's Dawn spacecraft. It uses inexpensive nitrogen rather than xenon gas and a simple radio frequency antenna to excite the plasma. It should be cheap enough to use on "ordinary" satellites to (gradually) push them from low Earth orbit up to geosynchronous orbit. This article offers additional background. To emphasize the simplicity of the design, when a part broke, Batischev and his team built a version of the engine using a Coke bottle for the glass tube and a Coke can as the antenna (picture below)! Talk about cheaper! 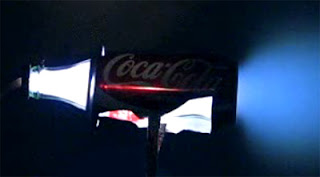 Posted by FlyingSinger at 11:03 PM