Robot Armada of the Future 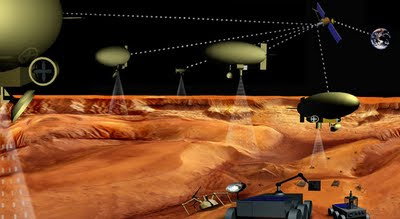 Here's a really cool news feature from JPL on future possibilities for robotic exploration of the solar system. When you think of exploring somewhere like Titan, it's hard to imagine doing it by the Mars Rover method - with engineers sending up a batch of commands every day and controlling every move when it's so far away (about 85 light-minutes one way right now). This article describes development work on autonomous, communicating robots that could eventually lead to rovers, crawlers, climbers, balloons, and orbiters, working together to explore according to general guidelines and goals. They would respond to developments like a cryovolcanic eruption or what-have-you more or less like an astronaut or geologist would (with curiosity and caution). I'm sure such a scenario is a few years off, but it's cool that Wolfgang Fink and others are working toward this goal now.  I'm sure there will be many down-to-Earth spinoffs in the meantime from Fink's company,  Cyberdyne Systems Corporation.