Where Are the Flying Cars? 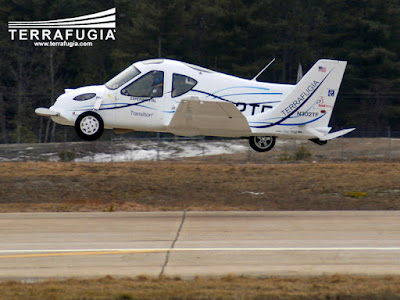 We live in the twenty-first century. People landed on the moon forty years ago. We carry tiny communication devices and computers in our pockets. This is The Future! Where are the flying cars?!?

They're coming in 2011. I've known about Terrafugia for a few years. It's a Boston area company that's been developing a "roadable light sport aircraft" since about 2006. I knew they had flown a prototype this year, but I hadn't seen many pictures until a friend of mine sent me a bunch today. It's cool in a weird way. Or weird in a cool way. I'm not sure. I'd love to fly one but I think I'd be afraid to drive a $200,000 car/plane on New England roads (which are full of New England drivers and potholes). I do have a pilot's license, but it's also a little out of my price range right now.
Posted by FlyingSinger at 9:52 PM

When I was a kid, I got a book showing all sorts of different types of aircraft. There was a flying car in there. It had detachable wings that it could tow like a trailer. This was to be the wave of the future. That was in the 60s. They were saying that we'd all have flying cars, hovercraft, or something by the year 2000.

So, I want to know. Where is my flying car?